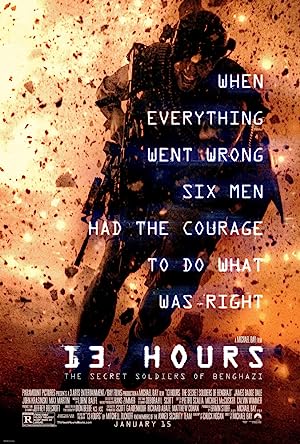 13 Hours: The Secret Soldiers of Benghazi 2016 American biographical war film directed and produced by Michael Bay and written by Chuck Hogan, based on Mitchell Zuckoff’s 2014 book of the same name. The film follows six members of the Annex Security Team who fought to defend the American diplomatic compound in Benghazi, Libya after waves of attacks by militants on September 11, 2012. The film stars James Badge Dale, John Krasinski, David Giuntoli, Max Martini, Pablo Schreiber, and Toby Stephens.

Filming began on April 27, 2015, in Malta and Morocco. Known colloquially as “the Benghazi movie”, the film was released on January 15, 2016, by Paramount Pictures. Upon release, 13 Hours received generally mixed reviews from critics and grossed just $69 million worldwide against a budget of $50 million, becoming Bay’s lowest-grossing film to date.